Following the early years of aviation, World War II launched the new era in Hot Springs. During WWII, the airport began the transition from grass strips to paved runways, metal hangars, and concrete buildings. The new construction was built to accommodate the injured military personnel flying into Hot Springs to be rehabilitated at the Army and Navy Hospital, currently known as the Hot Springs Rehabilitation Center. The new airport was dedicated in 1946 as McLaughlin Field, in honor of former Hot Springs Mayor Leo P. McLaughlin. 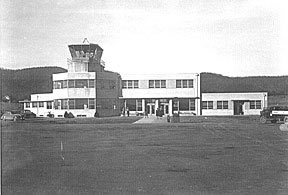 The airport was renamed Hot Springs Memorial Field on Memorial Day, May 30, 1947. During the same year, Hot Springs Airways was the first scheduled air service and operated for a number of years with service to Little Rock. Chicago & Southern Airlines Inc. (C&S) began serving Hot Springs in 1948 with daily flights with final destinations in Kansas City, Chicago, Detroit, Houston, New Orleans, Havana Cuba, Kingston Jamaica and Caracas Mexico. C&S was merged into Delta Air Lines in 1953, Delta Airlines continued service from Hot Springs. Growth continued in the commercial air service industry at the airport, with boardings totaling over 30,000 until de-regulation of the airlines in the late 1970’s ended what many call the golden age for Hot Springs Memorial Field. 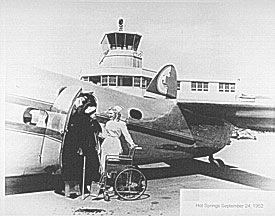 A Hot Springs Rehabilitation Center patient is
greeted by attending nurse as he disembarks
from a plane at Hot Springs Memorial Field in
September 1952.
Photo courtesy Garland County Historical Society

Commercial air service growth may have declined, but the time was right for general aviation to expand, and it did. In the early to , a few large companies constructed corporate-style hangars to house their aircraft fleet at a time when there was only a terminal building, fire station and a 1930’s style military hangar with ten small individual hangars for smaller aircraft. The annual revenue for the airport, just as many businesses in Hot Springs, was dependent on the Oaklawn thoroughbred race season.

Today, the race season still plays a large role in the airport’s annual revenues, but the balance for the rest of the year has been in other general aviation growth. Corporate travel has shifted away from commercial service to privately owned aircraft. Many local smaller corporations have their own aircraft. Seven corporate-style hangars, 51 smaller hangars, 11 small business hangars and the same 1930’s-vintage military hangar cover the north side of the airport’s 840 acres.