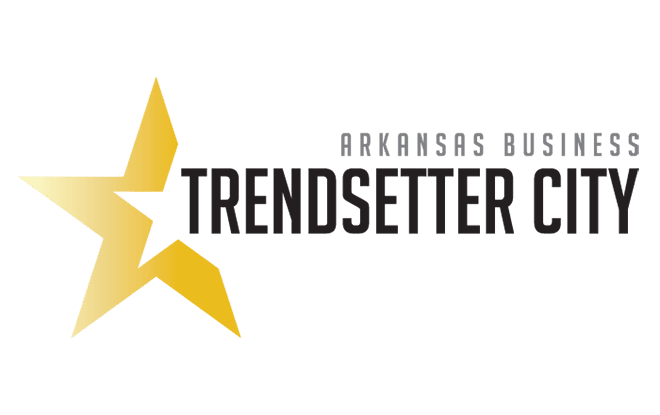 Providing pristine water to the residential customers at the City of Hot Springs (CHS) is the foremost mission of the City’s Utilities Department. An integral aspect of accomplishing this involves maintenance of four historical dams, including Arkansas’ oldest dam, and the nearly 4,000 acres that surround the dams and their associated bodies of water. In 2015, CHS Utilities contracted O’Brien & Gere Engineers to perform a safety and risk evaluation of the four dams. The resulting 2016 report provided a basis for the planning for the five-phase Dam Rehabilitation Project (Project) to provide the ultimate safety, stability and spillway maintenance for these dams that have served Hot Springs beginning in the late 1800s. This investment not only accomplished the aforementioned items, but also provided support to recreation and tourism for the area, adding to the outdoor culture Hot Springs has been known for since well before the first dam was constructed.

The first municipal water supply serving Hot Springs was located on Old Wire Road, also known as “Little Rock Highway” or North Highway 5/7, and now what is Park Avenue. In March of 1881, the Hot Springs City Council gave to Samuel Bleyer, a judge from St. Louis, approval to construct a water system for CHS. Judge Bleyer assigned his contract to Carroll Gray.

W. A. Bethel supervised construction of a native stone and masonry dam to impound water from Chalybeate Springs and other unnamed springs. Mr. Gray constructed a steam-powered pump station at what is now known as DeSoto Park. The stipulated capacity of the system was to have four streams of water flowing through 2.5-inch hoses, with 1-inch nozzles, to a height of 80 feet. An 8-inch cast iron main transported water up Park Avenue to Downtown Hot Springs and beyond. 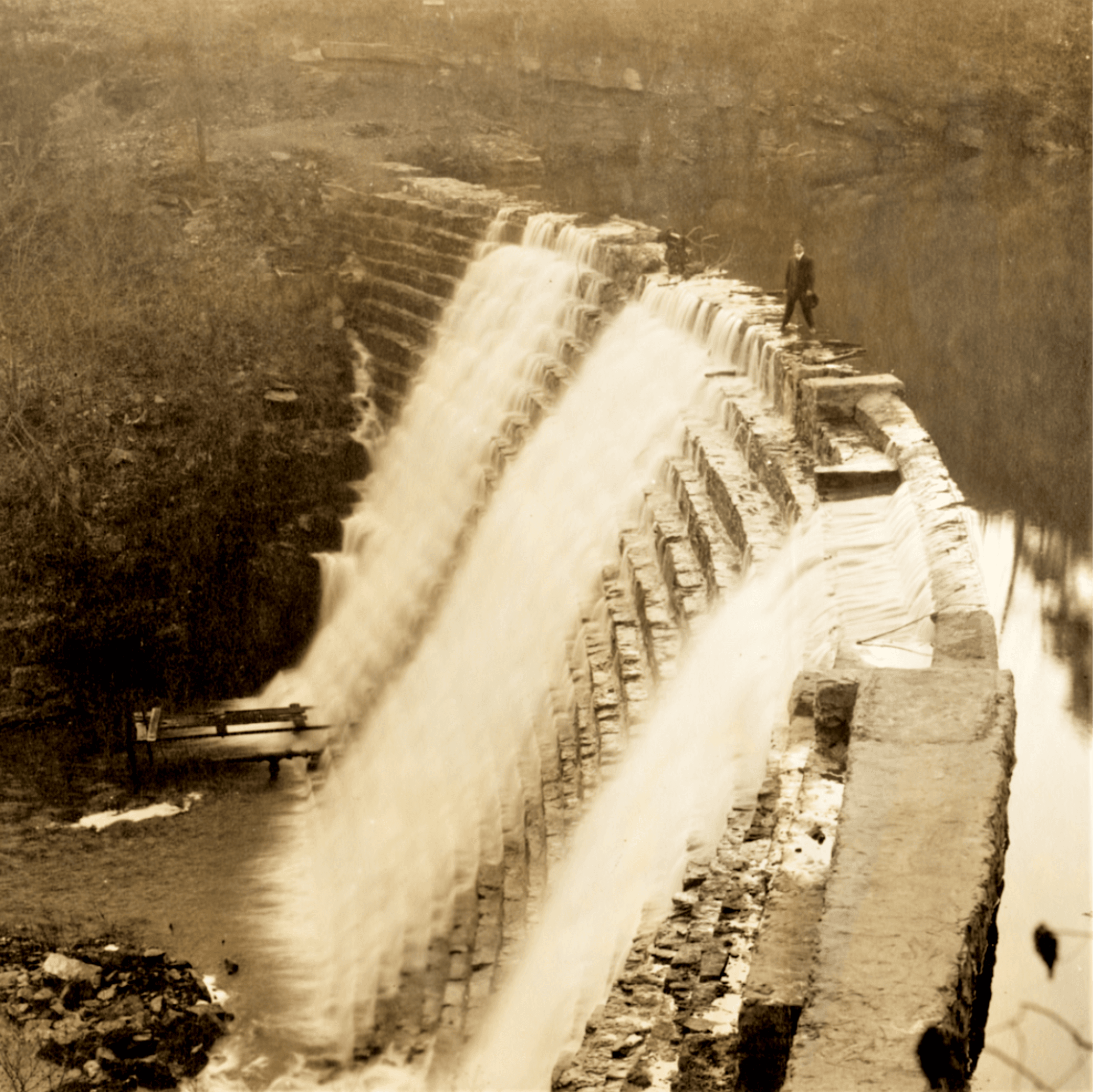 A year later, the City outgrew the reservoir and a new filtration plant and pumping station were constructed in the wilderness north of town. Located off Cedar Glades Road on the east branch of Bull Bayou, the site was ideal because dams could be constructed between the water gaps to create reservoirs that would allow water to gravity flow to all parts of the City. Lake Bethel, a 60-million-gallon impoundment and the first of four lakes, was formed by the first dam constructed in the state of Arkansas – Bethel Dam. There was no electricity at the time, so the City purchased an initial 2,200 acres for the wood to use to run the steam plant. An average of 2.5 cords of wood were required daily to generate the steam that powered the pumps that filled the reservoir. This land has also served to protect the watershed.

The men who operated the plant arrived for work by horse or buggy, or walked across the mountains. The plant operated non-stop, and work shifts were 12 hours: 6 a.m. to 6 p.m., and 6 p.m. to 6 a.m. It was not unusual to see deer swimming across the lake, migrating ducks pausing for a rest, and even an occasional bear wandering near the plant. The scenic beauty and park-like atmosphere made the water works a destination for local Hot Springs residents, perfect for a Sunday afternoon buggy ride or a hike to the reservoir. Quartz crystals were plentiful around the lake, and fresh spring water flowed for thirsty visitors.

As the Hot Springs population grew, so did the need for drinking water. At around 1903, a second stone and masonry dam formed Lake Dillon. The new lake provided another 260 million gallons to the overall storage capacity. Another 180 million gallons were added with the completion of Lake Sanderson in 1927. Lake Ricks was completed in 1949, and modified in 1957 with the addition of a 5-foot weir wall across the spillway crest to increase water supply storage. 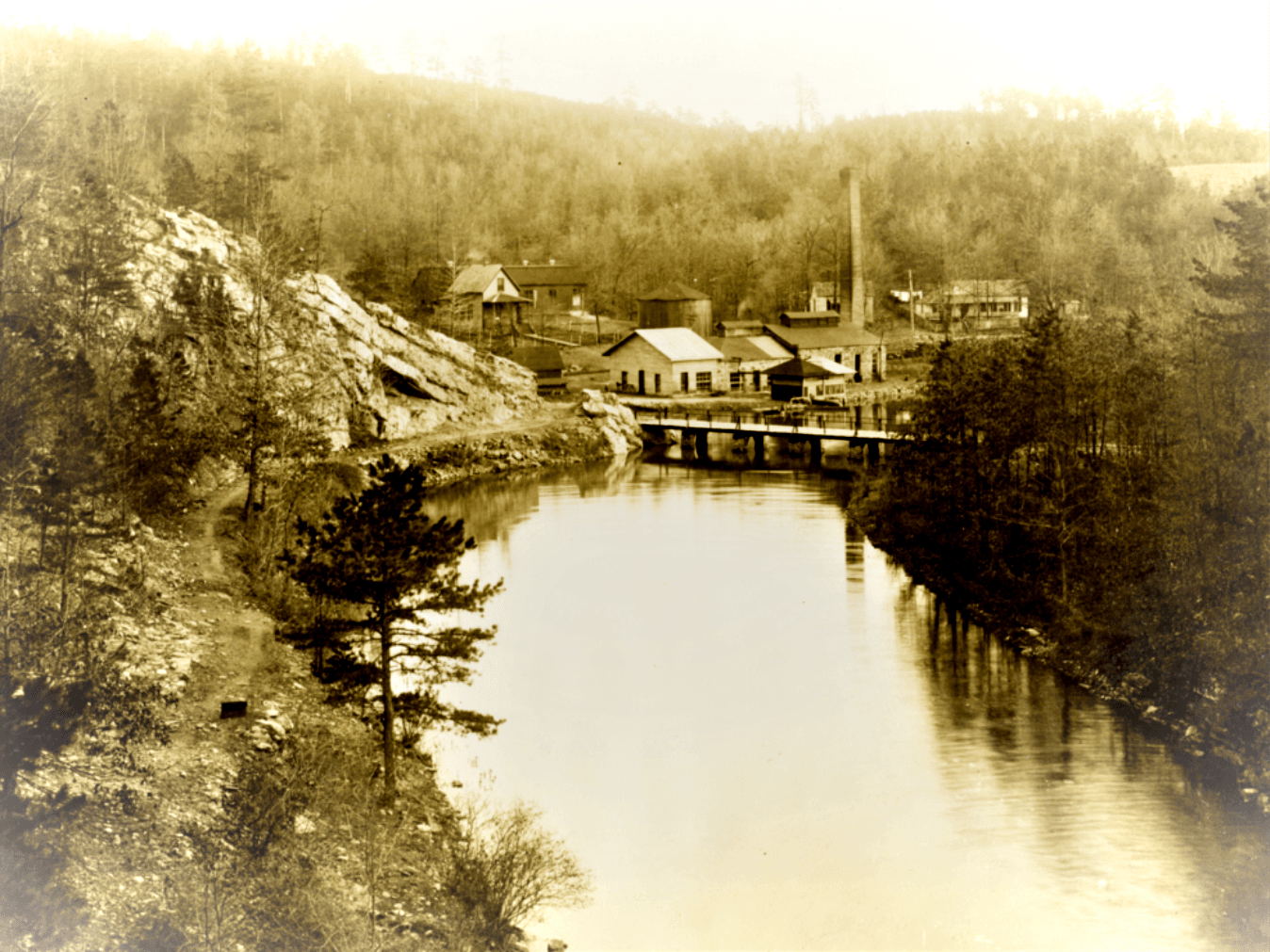 Although Lake Ricks is the only one of the four lakes that still serves as a water source to the Lakeside Water Treatment Plant, the Utilities Department will continue to ensure state and federal safety standards are upheld for all the structures. Dam ownership entails significant legal responsibilities. As the owner, CHS is obligated to maintain these dams in a safe condition in order to minimize the potential of dam failure and to protect the residents downstream. These historic dams were constructed using nearby materials, such as the rocks, mortar and sand out of area creeks. Dillon and Bethel are both arch dams, constructed from local stone materials. Studies evaluated the four dams, ranking them for structural integrity, looking at such factors as seepage, mortar missing from joints, missing stones and vegetation penetrating the masonry. The original objective of the Project was to bring the four dams up to modern safety standards. The Project also included geotechnical investigations, vegetation removal, repointing of masonry, spillway improvements and access bridge replacements.

On January 17, 2019, representatives from CHS Engineering and Utilities departments spent the day on site with Crist Engineers to review and develop a plan of action for the upcoming rehabilitation of the four dams – Lake Bethel Dam, Dillon Dam, Sanderson Dam and Ricks Dam. The first contract was for the vegetation removal on all four dams, and work began in May of 2019. The secondary spillway at Sanderson Dam underwent an amazing transformation with the removal of the vegetation growth and installation of reinforcing steel to counter years of erosion along its structural base. A new wall protects the weathered shale and layered sandstone. The channel below the spillway was also replaced with a 12-inch thick concrete base with energy dissipater rocks installed to slow rainwater and runoff falling over the spillway. The second contract included concrete repairs on Ricks and Sanderson dams, bringing them up to stability standards. The first and the second contracts were reported complete at the November 19, 2019, CHS Board Meeting. 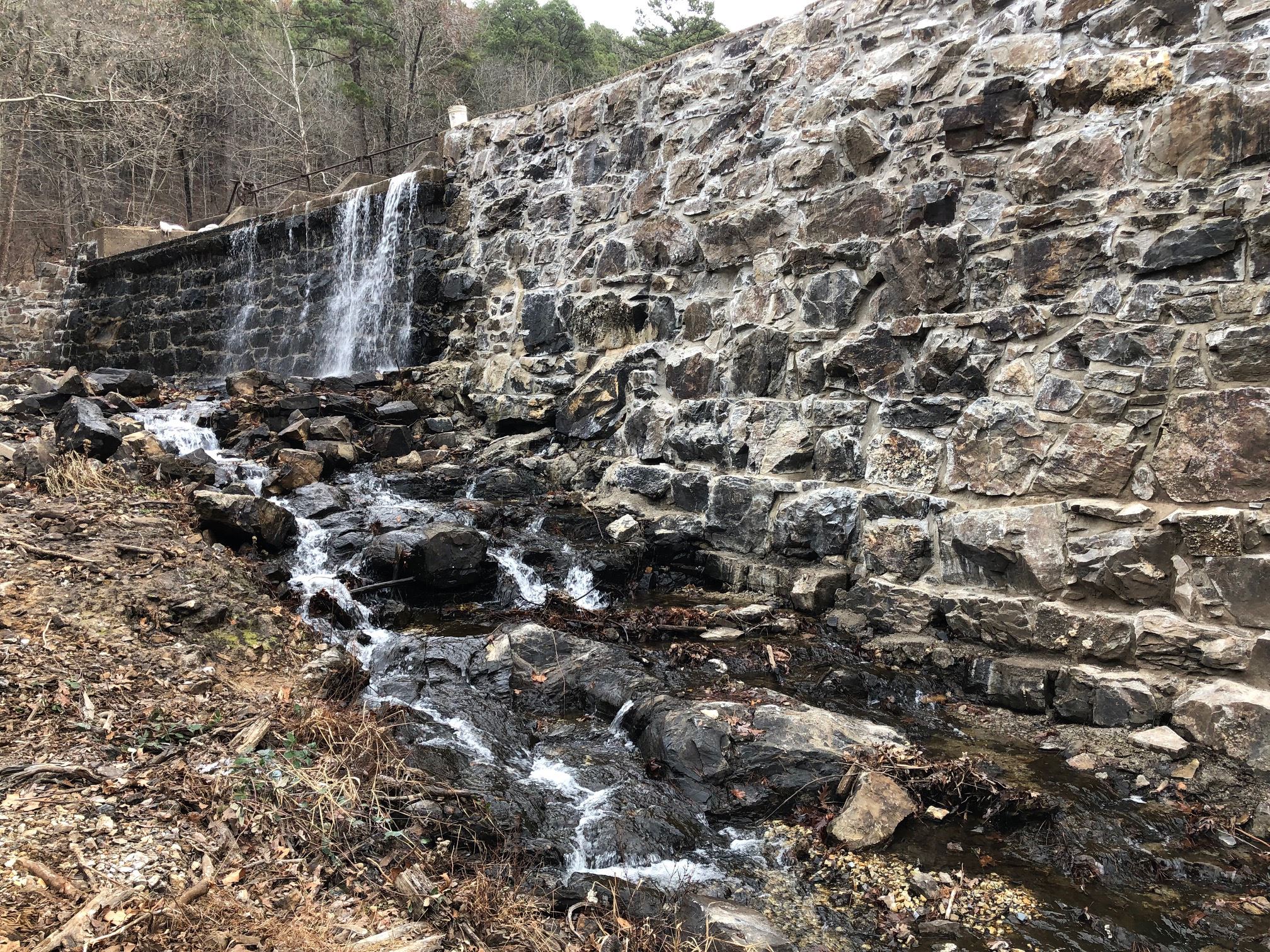 The third contract, which began in September of 2019, consisted of repairing the rubble masonry face of Bethel Dam and re-pointing the mortar. During construction, a leaking drain pipe near the base of the dam was removed and replaced with a new shut-off valve. Bethel Lake had been losing water through the old valve, and the new drain pipe will maintain the water level for the lake. On April 21, 2020, the City Manager reported to the CHS Board that all four dams had been brought up to the standards set forth by the Arkansas Natural Resources Commission (ANRC). With the completion of the first three contracts of the Project, the dams will not require additional investment for the next 20 years, other than small maintenance items.

The fourth contract of the Project was to replace the bridge at Lake Bethel. Since the dams are remote and lack access to get heavy equipment to their locations for normal maintenance, replacing the bridge at the end of Lake Bethel will allow crews to come from the Lakeside Water Treatment Plant to access Bethel, Dillon and Sanderson dams. The fifth and final contract is for a bridge over Sanderson Dam.

Concurrent with the Dam Improvements Project, Visit Hot Springs, with assistance from Tom Walton, Steuart Walton and the Walton Family Foundation, has constructed the Northwoods Trail System for mountain biking. The scenic 44.6-mile system incorporates the forested hills around Lakes Bethel, Dillon and Sanderson. This historical area that attracted Hot Springs residents for Sunday afternoon buggy rides and picnics is now drawing visitors from across the nation and the globe. The Dam Improvement Project spanned five years and consisted of five contracts. It involved hundreds of person-hours, but helped preserve more than 100 years of history while maintaining one of Hot Springs’ primary water sources, as well as the pristine woodlands that continue to attract residents and guests. 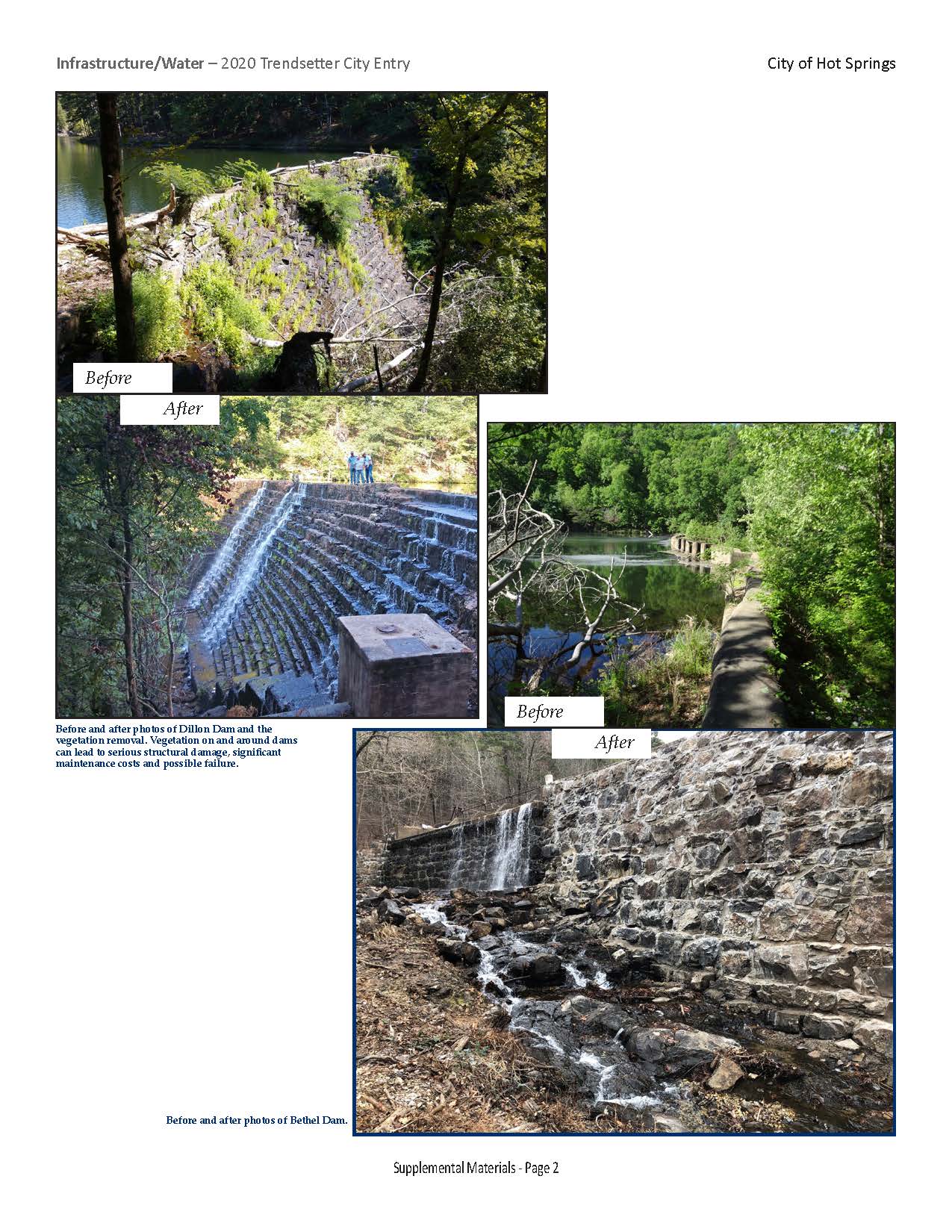 View the complete PDF of the winning entry for Dam Improvement Projects in the 2020 Arkansas Business Trendsetter Cities program.