The following statistics and information for Thursday, July 29, were shared at a press conference with the governor and/or were posted on the Arkansas Department of Health’s (ADH) website:

Gov. Asa Hutchinson presented a COVID-19 press conference today, his first since July 6. He has been hosting “Community Conversations” across the state to promote vaccinations.

He began with today’s COVID statistics, and at 2,843 new cases being recorded, he said it is one of the largest single-day increases the state has had since the start of the pandemic. Active cases rose by 1,431, and there were 11 additional deaths. Hospitalizations dropped by nine, but he said that leading up to today’s decline there were more consecutive days of hospitalization increases than he has seen. He is concerned that the sharp rise in new cases will lead to additional hospitalizations and deaths.

There were 10,717 additional vaccinations added over the past 24 hours, and Hutchinson hopes that vaccination acceptance will continue to improve.

Following the COVID statistical update, the governor announced that, effective immediately, he is reinstating the state’s public health emergency and it will extend for 60 days. He said the decision will be reviewed by the General Assembly.

Aside from the statistical evidence pointing to the need for this emergency declaration, Hutchinson said there were two other reasons for this announcement – to allow the state to seek staffing assistance through an interstate emergency assistance compact with other states and to ease the licensure process of healthcare professionals who wish to return to their profession or to speed entry into service.

Per Hutchinson’s request, the White House is sending a Surge Response Team to the state to help evaluate, strategize and maximize COVID hospital bed capacity in Arkansas.

An issue the governor said he is very concerned about is the safety of those 12 and under, who are yet to be eligible to receive COVID vaccinations, once the school year begins. He said he is calling a special session of the legislature, which will most likely occur next week, to discuss amending Act 1002 to allow school boards the authority to make their own local decisions regarding implementation of mask mandates within their school districts.

He said that Arkansas Children’s Hospital currently has 24 youth in the hospital with COVID, with two on ventilators and five in the ICU. None of the patients are fully immunized, and 12 are not eligible for the vaccines as they are 12 or under.

He said that there will be no statewide mask mandate, nor will there be mandates or restrictions on businesses. “Everyone knows what to do, and the guidelines are in place; this is all about the children and their health,” he said. 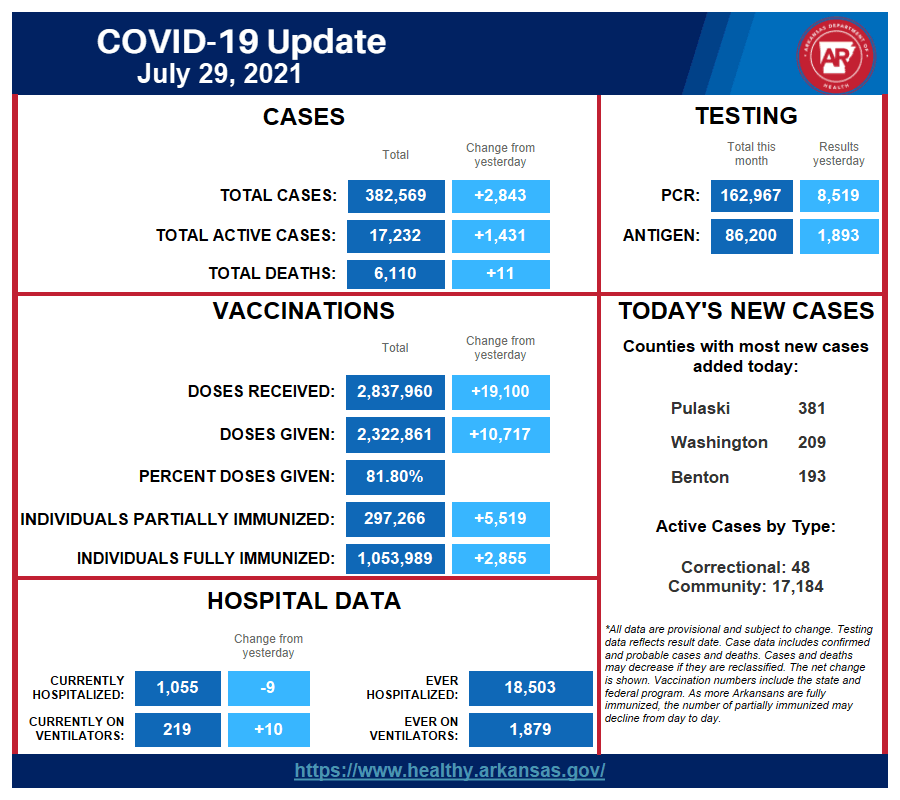