The following statistics were shared at the governor’s weekly COVID-19 update on Tuesday, Dec. 8, and posted on the Arkansas Department of Health’s (ADH) website:

Hutchinson shared that he has set up a series of “community action meetings” designed to get “real council from local leaders in terms of how the community is handling COVID” and to “spur local engagement.” He said he had his first meeting with local officials today in Saline County, and a takeaway was that officials there said the adherence to the mask mandate is very high. He said they had a good discussion on vaccine distribution plans. Also, due to feedback on the new proposed guideline requiring any indoor event in a commercial setting to have prior ADH approval, the guideline will not issued today. He said he will wait to see what other feedback he receives from the upcoming community meetings before he will possibly update or clarify the guideline. He did encourage everyone to take necessary precautions in terms of gatherings leading into this holiday season, and that anyone planning an event can work with ADH, even if the event falls below the 100 attendee size that currently requires pre-approval.

Hutchinson reported that FEMA has signed off on the state’s utilization of 10 hospital beds at the Veteran’s Hospital in Little Rock. TraumaCon is on target and hopes are to meet deadline for having it operational next week. An additional 125,000 rapid test kits were received by the state, which will continue to aid schools, local health units and the Department of Correction.

In reference to the 39 deaths reported today, which was followed by yesterday’s record-setting single day total of 53, Hutchinson said it is a “startling reminder of the continued challenge we face, the deadly nature of this virus and how we have to protect not just ourselves, but our loved ones. As the virus might be spread, it could go to somebody who has a vulnerability in terms of preconditions or other health conditions, or their age, and we would not want that to happen. That, in and of itself, is motivation to protect others with our own behavior.”

The seven-day rolling average of percent positive COVID-19 PCR tests has risen to around 12% after briefly dipping just below the 10% mark in late November. The combined PCR and antigen test rolling average is higher, up to around 14%. The growth rate of new COVID-19 cases from Nov. 29 – Dec. 5 by public health region shows that the Southeast Region has the highest percentages at 9.9%, followed by the Northeast Region at 9.6% and the Central Region with 9.5%. The growth rate during the same time by age group has the 0-17 age group at the highest at 9.7%, followed by the 65-and-older group at 9.5%.

Secretary of Health Dr. Jose Romero reported that the number of commercial test results has been down, which he expects to go back up over the next couple of days. He said this might translate into the state’s new case counts rising, as well. He stressed the importance of the simple measures, including masking at all times. He also said that non-essential travel is strongly discouraged. The CDC website offers input on pre- and post-travel testing, as well as measures that can be taken while on essential travel.

Secretary of Education Johnny Key said that 16 districts or schools had modifications to on-sight instruction last week. As of yesterday, Dec. 7, there were 22 active modifications and 317 that have now expired. As the end of the first half of the school year approaches, he and his team looked at additional data so far this school year relating to the total number of districts and schools around the state and who have or have not made modifications. A total of 187 districts, or 71%, have not had to enact district-wide modifications, versus 75 districts that have had some type of district-wide modification. There have been 828 schools, or 79%, that have not had a school-wide or grade level modification, as opposed to 222 schools that have had some type of modification. “This means that our administrators and our educators are continuing to do a good job of keeping kids in school knowing that every school in the state, every district in the state, has a virtual option,” said Key.

Larry Shackelford, president and CEO of Washington Regional Medical Center and member of the Winter COVID-19 Task Force, said that in Northwest Arkansas the increase in cases over the past few weeks has resulted in more patients needing in-patient care, with hospital numbers rising from the 70s to 110. “This is a rate of growth that we need to change moving forward,” he said. “The next two to four weeks are key,” he stressed. “We know that resources, including hospitals and clinics, are going to be tested. We are up for that test; but, on behalf of all of the healthcare workers of Arkansas, I would urge you, to everyone, do the right thing. We need to pull in the same direction to ensure that we are successful moving forward. 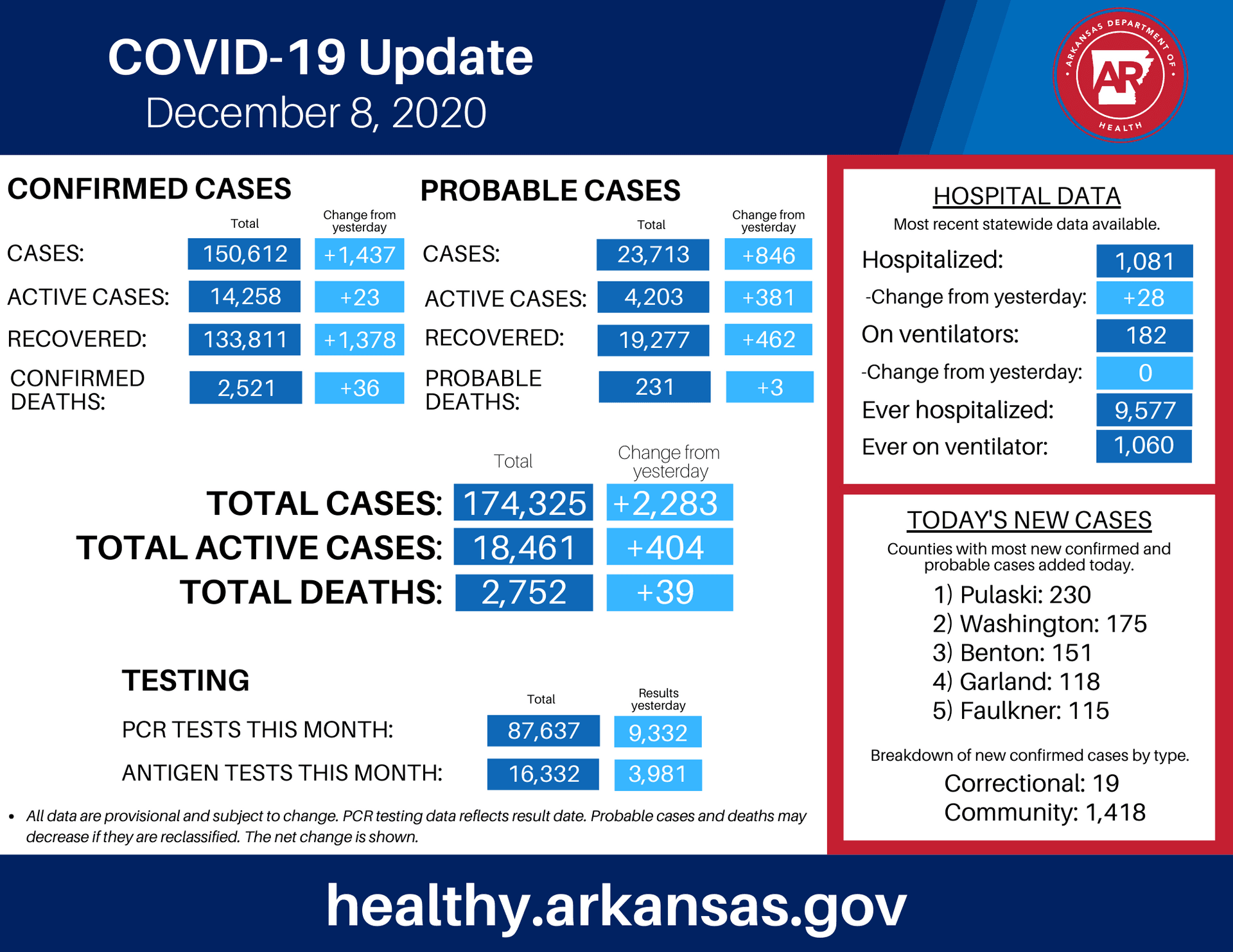