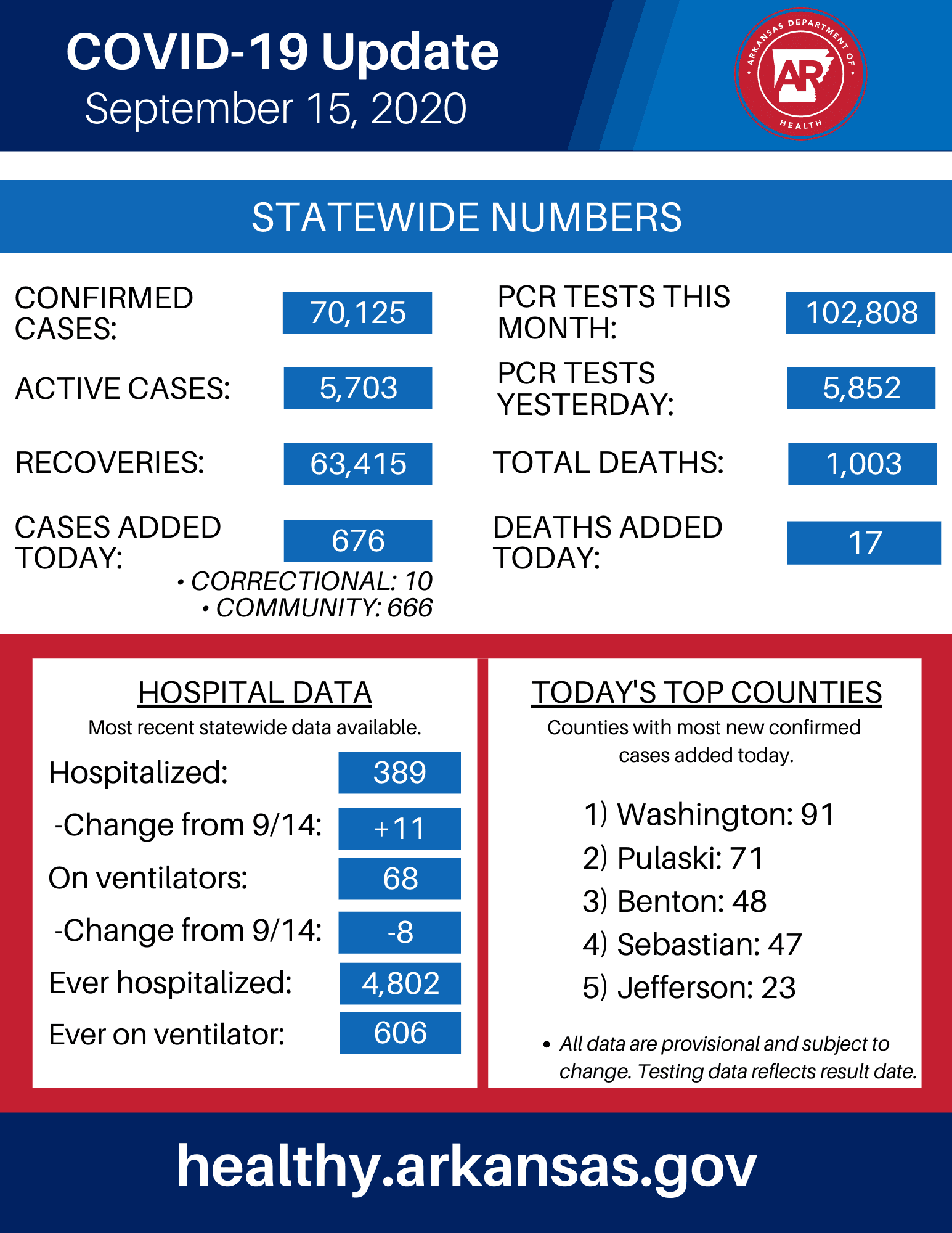 In the past 24 hours, the number of positive PCR tests added today in Arkansas was 676, with 666 from the community and 10 from correctional facilities. There were 880 antigen test results received in the past 24 hours, with 188 of them being positive for a positivity rate of 21.4%.

Counties with the number of new cases higher than 20 in the past 24 hours include Washington with 91, Pulaski with 71, Benton with 48, Sebastian with 47, Jefferson with 23, Garland with 22, Faulkner with 21 and Craighead with 20.

A county map of Arkansas with the 14-day moving average of percent positive by county was shown, and Garland County was listed with an 8.6% positivity rate.

Dr. Ivy Pfeffer, of the Department of Education, reported there have been 39 instances in which school districts have had to make modifications to on-site instruction due to COVID-19 since the start of public school. Of these, 22 are still ongoing, and there have been eight modifications added so far this week.

Hutchinson shared that there were 479,000 K-12 public students enrolled in the 2019-20 school year. So far this school year, there have been 574 active COVID-19 cases reported in the schools, which the governor said would be less than two-tenths of 1%.

Hutchinson announced that ADH has received 12,000 antigen test kits to allow the state to have at least two months of antigen testing through ADH, which will continue to prioritize K-12 schools and colleges through local health units and other entities across the state. He said that the state made an investment for in-house point-of-care testing equipment, but they did not have supplies, meaning they “have been a little bit hamstrung by the ability to greatly increase our antigen testing across Arkansas.”

In a second announcement, which the governor said was both frustrating and sad, 139 new deaths were added to the total COVID-19 deaths in Arkansas, which will be characterized as “probable deaths.” In accordance with the updated CDC guidelines in August pertaining to probable cases, these probable deaths include those who had a positive antigen test as well as those who had COVID-19 listed on their death certificate as a contributing or underlying factor, but lacked laboratory evidence.

For daily updates on COVID-19 in Arkansas, the governor listed the following online resources, with updates being posted mid-afternoon, seven days a week: