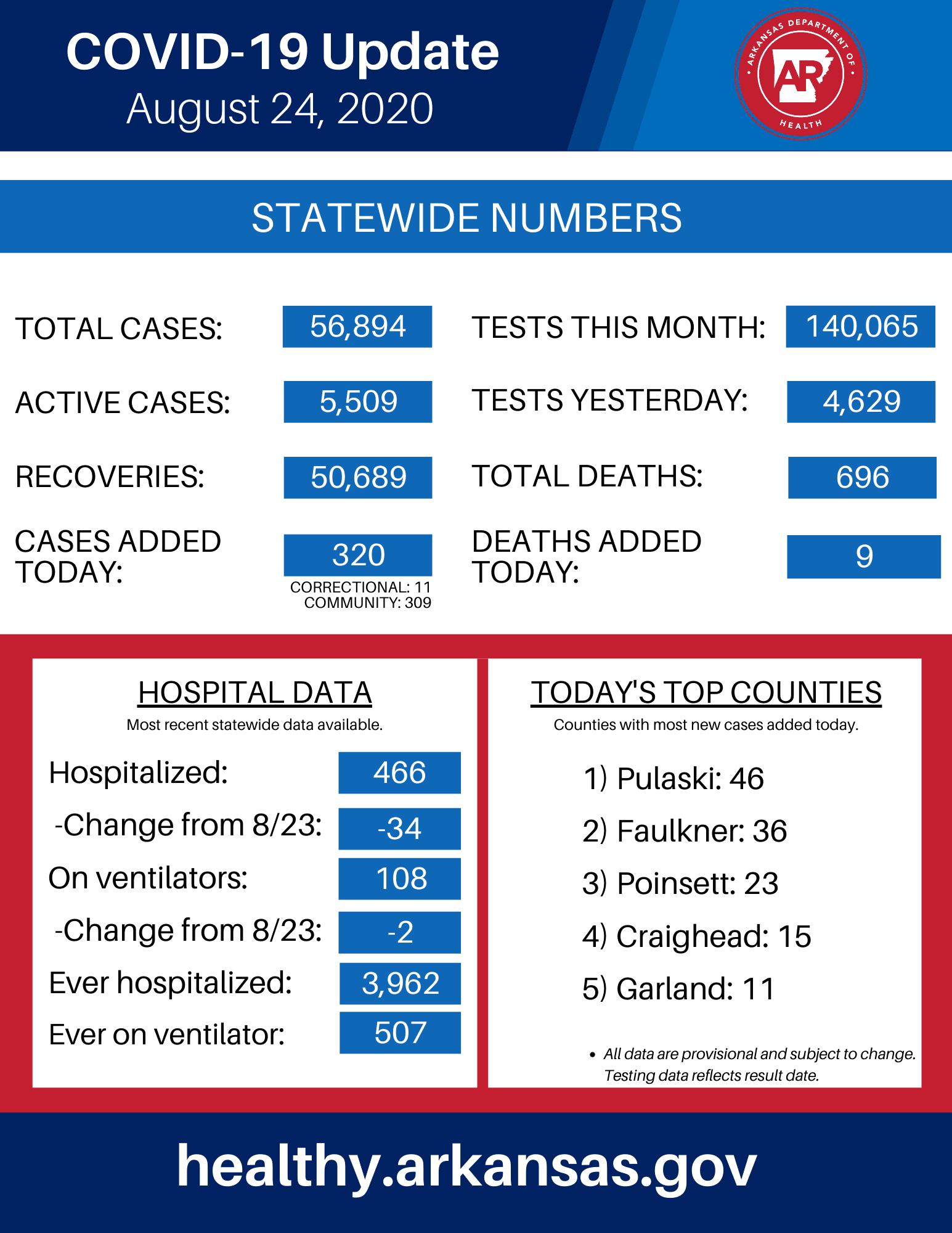 Hutchinson recalled challenging everyone in Arkansas to reduce the positivity rate and the number of new cases leading up to today’s start of public school, and he thanked “community leaders, and everybody for taking individual responsibility and, in fact, reducing those numbers over the last two weeks.”

Hutchinson and Secretary of Health Dr. Jose Romero shared a snapshot of contact tracing results from Aug. 10, a day that had 383 new cases. Of the total, there were 188 cases who were assigned to contact tracers, and a total of 413 contacts were identified and followed up with as well. One-third of the positive cases that day were asymptomatic. The key takeaways, according to Hutchinson and Romero, were that asymptomatic cases can spread the virus and the wearing of face masks is critical. Also, the need for robust testing continues. “We want to continue robust testing throughout the state; we are starting to see a little bit of a slowdown,” said Romero. “In order for our numbers to be predictive and to use for modeling into the future, and that is for schools to making decisions, we need to have robust testing in our community.” He said that all the state’s county local health departments will test anyone for COVID-19, which is done at no cost.

Dr. Tina Ipe, medical director for UAMS Blood Bank and Transfusion Division, spoke about the Arkansas Initiative relating to the use of convalescent plasma as a treatment for COVID-19, which she described as being “for Arkansans to help take care of other Arkansans.” She said everyone “has done a fabulous job,” and through this initiative they have been able to provide two units of convalescent plasma for every hospitalized patient, “and that is incredible,” she said. She added that she hopes they we can continue to provide convalescent plasma for the state, especially when they need to gather additional data on how efficacious convalescent plasma is for patients receiving it. Hutchinson said the state was ahead of the curve with UAMS taking the lead on this novel, new treatment protocol.

Secretary of Education Johnny Key shared that so far today, the reports he has received have been very positive. He said they continue to get feedback from around the state about challenges and the solutions being implemented from school districts. “We must follow the guidelines. If we want to have a successful school year, it starts from when we get on the bus, till we leave in the afternoon, and where we go after that and what we do will constitute whether we have a successful school year,” he said.